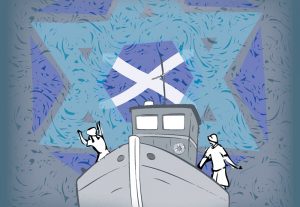 A story of new Scots on the path from the Holocaust to the Highlands, Jock Tamson’s Bairn comes to Aberdeen’s Tivoli Theatre this November.

An original play based on the life of Walter Kress, Holocaust refugee and adopted Aberdonian. His story explores his family’s experience of what it meant to be ‘new’ Scots in 1940s Aberdeen.

After six years in Aberdeen as an evacuee, Walter has adopted his new home wholeheartedly. Walter would appear to be your typical, sea-loving boy from north east Scotland. Except he is not.

The Kresses are Jewish Austrian refugees. His parents have spent the duration of the war interned in labour camps, and are deeply distrustful of their new country. So it comes as some surprise when – on meeting Walter – they are greeted by the thick Scots accent of a boy who wants nothing more than to work on boats.

A crisis ensues: his parents are suspicious of his new nationality, but to the locals he is suddenly not Scottish enough.

Walter finds some escape with friends and their hobby boat, but is he the boy they thought he was?

Jock Tamson’s Bairn is a story of identity, family and belonging.

“Walter Kress’s fascinating account of his early years provides a remarkable insight to his experiences as an immigrant to Scotland and that which can be achieved by ‘new’ Scots.” — Alex Salmond MP MSP