Bob starts work and moves to Renfrew as an apprentice mechanical engineer. He changes his name to Mackenzie to thank the family who rescued his sister and him.

He learns about the survival of his parents and the death of his grandfather. He marries and then joins the RAF. He describes his mother’s first visit to Scotland from communist East Germany.

BM: After leaving school I started my apprenticeship with a local electrical contractor. In 1948 The Refugee Council, who were my legal guardians, decided to move me to Glasgow. By this time Agnes and Janet were both married, Jessie was about to get married and Mr Mackenzie was going to move to Motherwell to live with Janet and her husband.

I couldn’t find a firm to complete my electrical apprenticeship in the Glasgow area so I started my apprenticeship all over again in a shipyard in Renfrew as a mechanical engineer. After about a year, I went for an interview with an electrical contractor in Paisley and was accepted to complete my electrical apprenticeship. It was during this time that I was given the chance to apply for British citizenship. I applied in March 1949 and my citizenship was finally authorised in February 1950. Once that was approved I decided to change my name as well; my name was Eberhard Rosenberg (mount of roses) and the Scottish equivalent would have been Montrose but after kindness shown to my sister and I over the past years I decided to thank Mr Mackenzie by adopting his name as he had no sons of his own to carry his name forward.

After the war we were overjoyed to discover that my parents had survived the war. My father and grandfather had both been taken away to concentration camps and, although my father survived, unfortunately my grandfather did not. My parents had been ejected from their home and my mother survived the war living with friends and relations. At the end of the war the Russian forces controlled the area where my parents lived and when the authorities discovered that my parents had been ejected they, in turn, ejected the German family who had moved in and the house was restored to my parents. My father tried to persuade me to come back to Germany but after being used to the freedom in this country and hearing of the tightly controlled life under the communist regime we decided not to return to Germany. Being in a Russian zone my parents were not allowed to travel to the West.

By this time I had met my future wife and we got married in November 1952. Shortly after this I was called up for National Service.

I went in to the RAF, in married quarters and…oh aye, got a letter from my mother saying she was coming to visit us in the married quarters and we went down to Kidderminster to meet her at the train and we sat there for a couple of hours, still nobody there, and we came back to the camp. And next door to us in the quarters was a sergeant who was married to a German woman who was interested in meeting my mother. When we returned home they asked us in for a cup of coffee and we talked about what could have happened to my mother.

And then there was a knock at the door and a gentleman asked if anyone knew where the people next door were as a lady wanted to see them. It turned out to be my mother. Someone on the train had told her it would be better getting off at Bridgenorth instead of Kidderminster and didn’t realise that we were waiting at Kidderminster. She got off the train, no idea how to get there, made a few questions in her halting English and started to walk it, not realising it was three miles to the camp and a December day. Anyway, this gentleman stopped and got her up to the house and that’s when we took her next door and I raked up the fire after dampening it down and the chimney went up in fire. So, as I said, the RAF married quarters have an RAF Fire Service and their idea of a chimney fire is ladder against the roof, hose down the chimney and turn on the water.

It was very effective but as you can imagine, the mess down below…So after we started to clean up. My wife was going to help but my mother said “No, no, no. Setzen sie, setzen sie” (Sit down) and her and I, after…it must have been seventeen/eighteen years since we had seen each other, spent the first hour together on hands and knees on the floor cleaning up the mess! What a reunion! Anyway, after we had cleaned up the mess there we asked how on earth she had managed to get out and that’s when she explained. Now I think it was…who was it she went to see? Permission to visit her brother, her brother in Köln. She got permission from the Russian authorities to visit her brother and when she went there he took her up to the Burgermeister and, as I say, the Burgermeister there issued the passports.

But to carry on with the story…After three years in the forces I was demobbed and found it difficult to settle down. I had several jobs then joined the government service. We were writing regularly to my parents and in ’56 my wife and I decided she should go and visit my parents with their first grandchild.

We reckoned as they had missed out on their own children growing up they should at least see their grandchildren. The arrangements were made and money was tight; the most economical form of transport was to go by train. So my wife went first to stay with my sister in Blackpool and my sister accompanied her to London and from there it was by train to Dover, then the ferry and by train to Köln where she spent the night with friends of my parents. The following day on the train again to Magdeburg on the border between East and West Germany where my father met her; he worked with the railways in East Germany. When you think it is quite a journey with an eighteen-month-old child and a woman on her own. You know, they weren’t quite as sophisticated as they are nowadays, you know. And my wife and son stayed for a period of six weeks.

When she came back and told me about the restrictions imposed over there, I was glad I had not gone back home after the war, as my father had wanted. On arrival at my parents’ house she had to sign the book at the house listing all the visitors, then go to the police station to register her arrival and inform them of her length of stay. And my parents told her to be sure to keep sufficient English money to pay for her exit visa as you cannot pay for that in German money.

INT: And why did you decide not to go with her?

BM: Well I couldn’t go because I was working with government service and the work I was doing was restricted, security was quite high. And then of course they were in the Russian zone so there was no way I could go to a communist country, working for the British government.

Right… And there was also…the other fault, was there was a possibility they were looking for technical personnel, if I’d gone there I might never have got back out again.

INT: But you were a British citizen by that time?

BM: Only in the British Commonwealth. If you go back to your country of birth, never mind the Kinderausweis ‘staatenlos’. As far as the Russians were concerned – they won the war, they’ll dictate…he’s a German, he’s a German – he stays here. Right? That was it. So the British citizenship, I mean it tells you on the documentation that I’ve got ‘Valid, except in the country of my birth.’

BM: You see? So you’ve got to be careful with these little, all these little quirks upset you. Anyway…while living in Beith in Ayrshire we got word that my father had retired and that his travel restrictions no longer applied. So in the summer of ’58 my mother and my father came to visit us. It was only now that my mother told my father she’d been to see us. At first he wouldn’t believe it but when he saw the photos of us together he had no choice. He had to believe it, you know. The reason my mother had not told him was she was so frightened it would slip out accidentally and they would both be punished for breaking the travel regulations imposed by the East German Authorities. That was the last time I saw my parents. As a government employee with a high security clearance, I was not permitted to travel to a communist controlled country. Both my parents passed away in ‘68.

In ’74 my wife and I took our first trip back to the country of my birth. Due to my government service it was impossible for us to cross over to communist controlled East Germany to visit the home I was brought up in. We toured West Germany, calling on friends stationed there in the forces. Prior to going over we had been in touch with my mother’s sister, who was a governess in Dresden. She was a… I suppose child-minder is as good an explanation as any. A painter there, a widower, who had seven children, she looked after them. Now, during her working days she had been housekeeper and nanny for the widower with seven children. Now living in Rendsburg…one of the children, Maria, was now living in Rendsburg in West Germany. So it was arranged that we would go up to Rendsburg and visit Maria and my aunt would come from East Germany to visit Maria…

it was a good excuse ,’one of my children’, you know. When we arrived in Rendsburg we found Aunt Gertrude was waiting for us; that was our first meeting in thirty-five years. Just imagine it. At great risk to herself she smuggled out my father’s watch to bring to me. This was a watch that my grandfather had given to my father and my father had promised me ‘You come back to Germany and it’s yours’.

BM: I wouldn’t go back to Germany so he kept it but Aunt Gertrude got it and she smuggled it out for me. I’ve still got it yet. It was hidden all during the war by my mother. In fact my mother had jewellery which was buried during the war and she got it out…you know, the war was finished, she got it back up…got my father’s watch and got her jewellery back.

And she got the jewellery made into two rings; one was a solitaire diamond with stones either side and the other was five in a row, diamonds. One was for my sister and one was for my wife, Betty. So when my sister died the ring came to my wife, Betty and she has the two of them now. But…where was I? Oh aye, the same watch he’d given me… 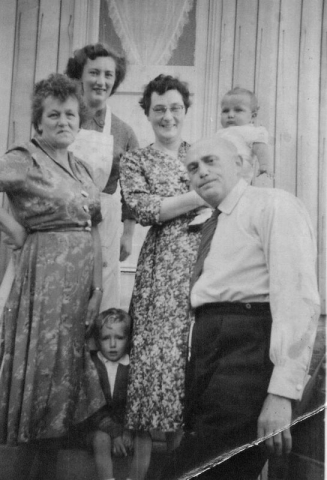 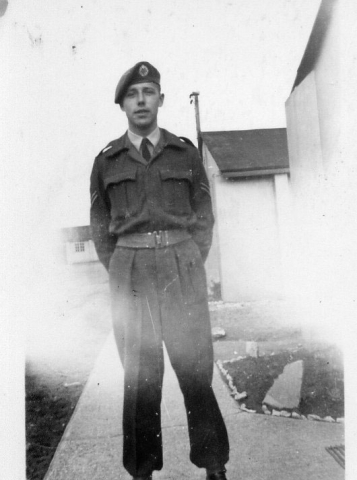 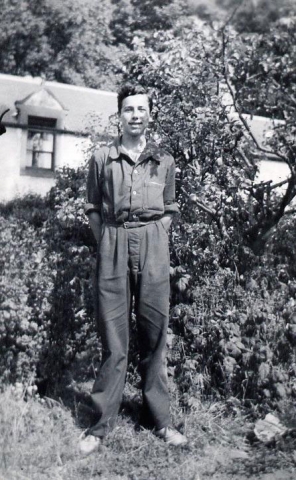 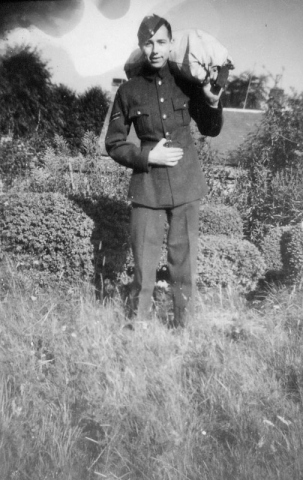