INT: Today is the 9th of April 2012 and I’m here to interview Mrs Evelyn Strang. Could you tell me please when you were born, where and what was your name at birth?

INT: My goodness. What was your life like in Leipzig before all this happened?

I couldn’t understand. But it didn’t last long, did it? ’38, knock on the door about 5/6 in the morning and we had to get dressed. My mother said ‘I must pack! I must pack!’

‘No. Nothing. Take nothing. Not allowed to take anything’

INT: And was that in November? Was that after the Kristallnacht?

E.S: It was before Kristallnacht.

E.S: We got away in October.

INT: And did you have brothers or sisters? Or were you an only child?

E.S: A brother. At that time I had a brother but my mother had another child in Scotland. She must have been about 40. She had a boy, so I have a brother 18 years younger than I am.

INT: So what age were you then? I’m sorry my maths is terrible.

INT: So you wouldn’t really have known what was happening.

E.S: I was quite…I can remember quite a lot.

INT: I suppose it was so traumatic that you would.

E.S: It was but I was with my parents so I don’t think I was very worried. But we were in that train all day and all night we had to walk. It was pouring with rain. I had to walk, my brother was 3 so he got carried. So that was the beginning.

E.S: Well it was just the Germans. I was just a little girl playing and ‘We’ll soon have you all exterminated’. I didn’t know what he meant.

INT: This was in Germany?

INT: At school or just in the street?

E.S: Just in the street.

E.S: This German just said ‘We’re going to have you all exterminated’. I didn’t really know what it meant.

50INT: And you must, were you with your mother at the time?

E.S: All the family were together. This was before ’38.

INT: That must have been terrifying for a child.

INT: And your older brother, did he stay in Glasgow or did he..?

INT: Now you were telling me about some of these photographs. Can we start with this one please?

E.S: Yes that’s my mother aged 3, before the First World War, my grandparents crossing into Switzerland. And after the war he decided to come back to Germany which was a big mistake.

INT: That’s amazing. And these are the people who rescued you?

INT: That’s you, oh you were beautiful!

And that’s my grandmother.

INT: What an elegant dress.

INT: What a beautiful dress.

INT: So when was that one taken?

E.S: Oh that was my hair I think, the colour.

E.S: And this, these are all the people who died in Auschwitz. My grandparents.

INT: Who else? All these people?

E.S: My father fought for Maccabi

INT: Oh that’s him in his boxing shorts!

INT: With the .Magen David on it, and that’s in Germany as well?

E.S: He was. That’s my first birthday. Now this is Germany, my grandparents, and you can see swastikas. Can you see?

INT: A lot of flags.

E.S: Can you see? You need to really enlarge it.

INT: Yes to see them.

E.S: That was in Berlin.

E.S: This is Alwernia which I’ll show you the map.

INT: Where is that? Is that in Germany?

INT: Ah, so did your grandparents originate in Poland?

E.S: No they, well my great-grandparents did.

E.S: But they actually had a lovely butcher’s shop in Leipzig but the Germans said if you sell pig we will let you keep the shop open and my grandfather was too orthodox and they had to leave and go to Poland and live in this cottage. It was very poor, no sanitation. It says on the back ‘Alwernia’.

INT: ‘Alwernia 1935’ And that’s why they’d have been sent to Auschwitz from Poland.

E.S: Well that’s me in the pram in Germany.

E.S: My mother modelling a coat in Leipzig.

E.S: That’s the factory in Leipzig.

E.S: Well this was Alwernia.Katowice. My father in a fur coat.

E.S: I could have it. This with the family again. And I’ve got, that’s great, great, great uncle Isaac. That was, quite a lot of these people were on that picture but they were much younger.

E.S: They were much younger. And this is also Alwernia.

E.S: Me hanging out the window, my grandmother.

INT: You were extremely cute.

INT: Yes very cute. It looks as if you’ve got a kite or something. No you’re holding the door, the window

E.S: And this is a picture of Alwernia now this church is on the computer. And this was written for my first birthday but the stamps say Alwernia.

E.S: And that was right beside Auschwitz.

INT: Is that right?

INT: Alwernia is near Auschwitz. Goodness.

INT: And Auschwitz would just have been in another little village that had no significance.

INT: Is that right? That’s interesting.

E.S: It’s in my uncle’s little booklet which is very funny. This is just my first birthday. That’s a German stamp.

INT: That’s Bismarck on it.

E.S: I got a lot of letters for my first birthday.

Links to Other Testimonies by Evelyn Strang 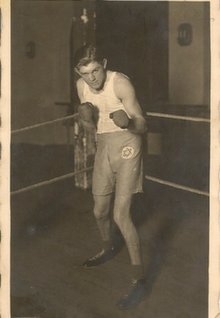 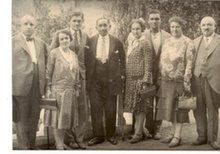 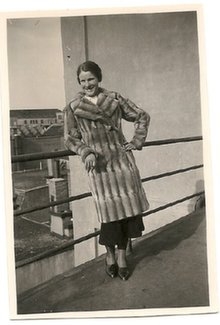 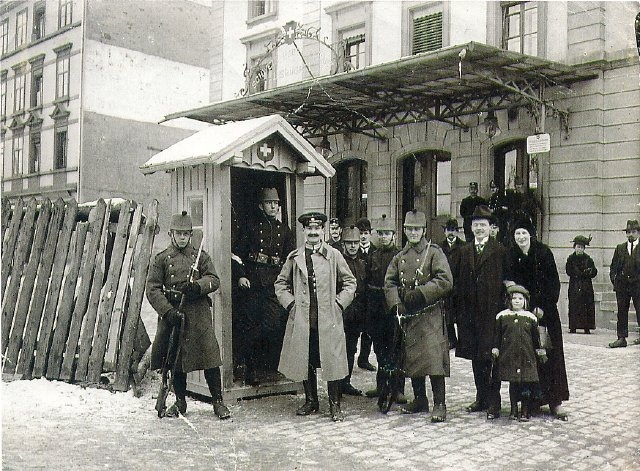