Henry describes how the Kindertransport system enabled him to leave Germany and come to Britain. He was initially looked after by relatives of his mother who lived in Glasgow. These relatives and other Jewish families helped him to settle in.

I came to Glasgow on Kindertransport. My mother asked the committee [who] found a place for me on the Kindertransport but we had a connection in Glasgow.

In Glasgow my mother’s cousin, Mrs Gummers, Gummers the dentist; they emigrated to Glasgow from Germany so my mother asked Greta Gummers could she find a place for me and then the committee in Glasgow, the Ladies Committee – Mrs Thora Wolffson and Mrs Thelma Mann found me a place and I came by Kindertransport to Glasgow.

INT: Can you tell us about the, your experiences when you were coming to Glasgow? Coming on the Kindertransport?

H.W: Yes well it’s traumatic to start with. You’re taken to the station, you wave goodbye to your parents, you have no idea whether you will ever see them again. It was quite traumatic really. On the other hand, may I tell you being a boy, and being somewhat adventurous I was always interested in travel and where to go and what to do.

I fully understood, coming from Nurnberg, I meanI was politically aware of what, why and where and how. I said to my mother ‘Why must I go with this train straight into London and then into Glasgow? Why can’t I take a train via Paris and stay with my cousin for a week?’

It wasn’t, it wasn’t like that but you understand?

H.W: In any case, we, you’re in the train with all these other children – some very young, some very traumatised, crying whatever. When we crossed the German frontier things became easier.

The German soldiers left the train. We were in Holland and you were – everybody will tell you from the Kindertransport – in Holland, whenever the train stopped at the station there were groups of women, Dutch women, with chocolate and apples and sandwiches – it was really quite amazing. Hoek van Holland, overnight in the boat. The first time I crossed the channel – the first time I’d seen the sea – mind you – it was night time.

I arrived in Harwich the next morning, again onto a train, taken to Liverpool Street Station, underground, a huge waiting room, I mean down below. A black hole, there must have been about two hundred children in it.

All the paraphernalia of the committees and children being collected and myself and another two children were kept there. We were sitting there for hours. Everybody was collected; we were not. We were going on to Glasgow the next day so we stayed in London overnight at some Hostel. So you’re sitting there for hours, it was quite, quite horrendous. But next day we left, we left for Glasgow.

We were taken to Euston Station by the Flying Scotsman, never having been in a compartment with upholstery before. I mean in Germany we travelled third class in wooden benches. It was quite interesting and we were taken to the dining car and we had waiters.

I mean the waiter had white gloves [and there were] silver teapots and I remember that little girl wouldn’t take this or that, she wanted hot chocolate – well, she got hot chocolate so that was quite an experience coming here, quite a… Arriving in Glasgow of course I was collected by my second cousin and taken to my new lodgings.

INT: And what, who did you lodge with?

H.W: The, the lady that took me in was a Mrs Eta Harwich. She lived in Queens Drive; 169 Queens Drive. The lady must have been in her mid sixties; her children were all grown up, obviously no longer in Glasgow.

One daughter was in Glasgow, her son who ran the factory (she still had an upholstery factory) he was still at home and they took me in. She was a wonderful lady, very, very intellectual lady, I must say. She took me to the theatre, she took me to music and she made me feel very much at home.

INT: But it must have been traumatic for you Henry?

H.W: It is. The language is different, the food is different – everything is different, but well you just have to cope with it. It was traumatic but, I mean, I did manage to get through it. Some of the younger ones found it rather difficult

INT: What age were you when you arrived in Glasgow?

H.W: Fifteen and a half

INT: Fifteen and a half and what, did you go to school then?

H.W: Yes. Well, the first thing that happened, Mrs Harwich had grandchildren and friends in the West End and I met with them; I was taken there obviously. The Sassoons of Kirkcudbright, the family Sassoon. David Sassoon and his wife Vera lived in Kirkcudbright with two sons. They invited me on holiday. So I came here, I was taken in, Mrs Harwich insisted that I should go to school, which was, I went to Queens Park School – only for a few weeks because then the holidays intervened. Yes, the summer holidays. And then I went to the Sassoon’s for four weeks.

INT: Was that a relative of Siegfried?

That was interesting; they had a huge house in Kirkcudbright – lovely. Carpets and paintings and whatnot but we lived on Carrick Shore in a hut, no electricity, no water, tilley lamps, I mean that’s how it was. My first connection with the sea, now I don’t know if you know the Solway Firth?

H.W: The tide goes out for three miles so, you be careful you’re not caught by the tide. It was very interesting for me; wonderful time to be had with another friend, we stayed with them for three weeks, and I’ve been friendly with them ever since.

When we came back to Glasgow I went back to school.

Links to Other Testimonies by Henry Wuga 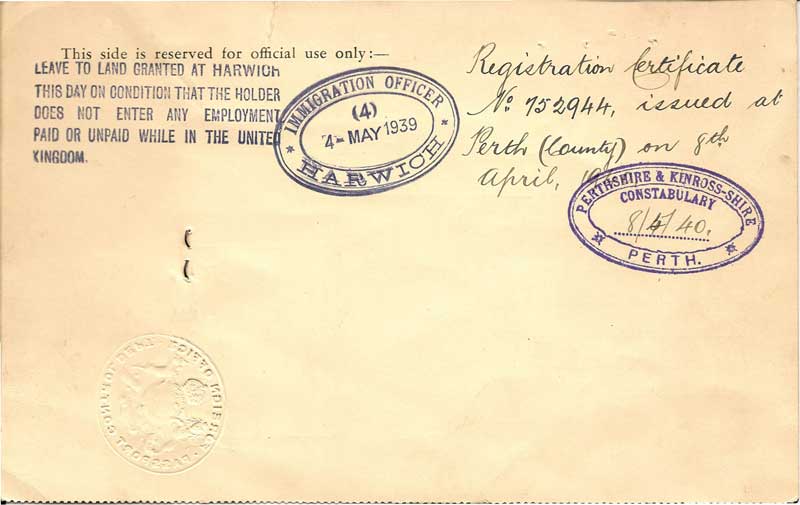