Marianne discusses how her life returned to something closer to normal. She describes her education both at school and at university. She then goes on to speak about the Hungarian Uprising of 1956 and the decision that she and her new husband made to leave Hungary.

INT: How long did it take until you got back to normal? Some sort of normal in your old home?

ML: I don’t think we ever got back to normal.

INT: Never got back to normal.

ML: Never back to normal, I should say. But we just managed to do something there.

INT: What about your education Marianne?

ML: This is what I wanted to go on to. After that there was not enough Jewish children…there was no Jewish school anymore so I had to take a…because I had lost one year of education while we were away in the, in the Holocaust when they took us into the… deported us to the slave labour camp.

I lost one year and then when I went back we had a special course and an exam and then we managed to get in to the church school. There was not a state school yet it was still a school run by the church…well, like the Church of Scotland.

ML: Or something similar, a Protestant Hungarian…

ML: Yes. And they had a school, a girls’, ‘Gymnasium’ they called it and one for boys. So I went to the girls’ school so I didn’t really…lost year… because the one year that I lost during the Holocaust I made an exam so I could manage to join to the group the same age in the school.

And then it just went on; education went on as normal. There were only three Jewish children in the class, in my class in that school and then there was a…when I was eighteen…seventeen/eighteen I was matriculated and then after I went to the university. But by this time it was the Red …, the communist system was in Hungary and we were taught in the communist system. And then 1956 there started the trouble, the Hungarian uprising when a lot of children, or a lot of people, especially students were very unhappy that they could get literature from every country but they weren’t allowed to get a visa, weren’t allowed to go and travel like other people travelled in the free world and we were very unhappy about it. And then the Hungarian uprising started in 1956 in October.

INT: Can I just stop you for a minute? That’s…from the end of the war to the uprising that’s eleven years. But in that eleven years you graduated, you went out to work, you got married, yes? Tell me a bit more about that.

ML: Well I finished school and went to university and I met my husband who was already a lecturer in the medical school and it was a custom in the communist system that on the 1st of May we used to march and celebrate the May Day and then that’s where I met my husband. And then, and then after that…well we got married and in ’56, in the uprising…well, he didn’t want to go out and especially my husband didn’t want to leave Hungary. And then his professor was encouraging him and told him ‘Just go, go, because young people have no future in this country any longer – just go, go, go.’

Links to Other Testimonies by Marianne Lazlo 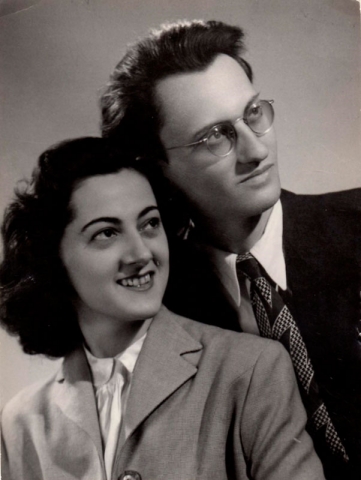